Automotive Light-weighting and What it Means for Plastics

In the last few decades, passenger vehicles and even heavy trucks have become lighter in weight, less costly to manufacture and more efficient to operate. Government standards on fuel economy and CO2 emissions are one of the reasons behind this major trend. It has been estimated that for every 100 kg weight saved in a car, the CO2 emissions are reduced by 8.5-10 g/km. Under currently pending EU norms, the fleet average to be achieved by all new cars by 2021 will be 95g of CO2 per km, representing a reduction of 40% since 2007. (1) Even pickup trucks and fleet vehicles such as general-purpose utility and delivery vans have become smaller and lighter in weight due to the ever-present need to be economically efficient and environmentally sustainable. Let’s take a look at the effect of some of these trends on the use of plastics and thermoplastic composites.

When plastics first began making significant inroads into automotive applications, the emphasis was on matching cosmetics and appearance, where plastic components closely resembled the metal parts they were designed to replace. Eventually as automotive engineers began to appreciate the many other benefits that plastics offered, they began to explore more demanding underhood and fuel system components where heat and chemical resistance, along with dimensional stability were critical performance requirements.  These benefits include: Greater design freedom, Shorter manufacturing time, Easier assembly and Higher strength-to-weight ratio.
This trend has led to the use of higher performing plastics which are typically reinforced with various amounts of short and long glass-fiber for higher stiffness and impact strength. Such plastics are: Polyacetal (POM), Various types of polyamides (PA6, PA66, PA46, PA12, etc.), Polyesters (PBT, PET), Higher heat plastics like polyphenylene sulfide (PPS), polyphthalamides (PPA), polyarylamide (PARA) and polyetherimide (PEI). The past 10 years have witnessed an increased attention to the use of thermoplastic composites, manufactured via several different techniques, the most common being long-fiber glass pultrusions and woven glass or carbon fiber prepregs, laminated between sheets of the same or a compatible resin and subsequently stamped or thermoformed into a net or near-net shape.

The main advantage of composites for these applications is their ability to provide even higher strength to weight ratio than a single glass or carbon-fiber reinforced resin by itself, which can in many cases result in lower cost tooling as the thermoplastic composites manufacturing process typically, does not require high-pressure injection molds.

In general, there are three approaches that can result in lighter weight: material, design and process.

In the first approach, changing a material to achieve lighter weight is only possible when the material to be replaced is significantly higher in density than the material to be substituted. An example of this would be replacing a steel part with glass-reinforced nylon, since the density difference from steel to GR nylon is roughly 8:1. 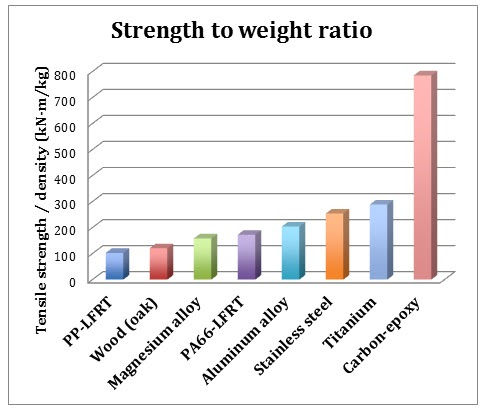 However, this assumes that the nylon part could resist the same load. In reality this would not be the case
since the difference in stiffness (elastic modulus) between steel and GR nylon is roughly 30:1.
Therefore, the only way to achieve this weight reduction without sacrificing mechanical properties is to change the design.

In the second approach, innovations in design can also achieve lighter weight. It is the case, where there exists the freedom to consolidate adjacent parts or eliminate extra brackets and metal fasteners by utilizing the ability of most plastics to function in different ways. For example, an air intake manifold traditionally manufactured from cast aluminum or steel can be replaced with a two-piece injection-molded part that is vibration-welded to join the two halves together, forming a reliable air-tight seal. Another example is where a metal cooling fan consisting of separate bearing, hub and blades can be redesigned as a one-piece plastic fan, where the bearing can be insert-molded at the time of manufacture or press-fit into the hub afterwards. 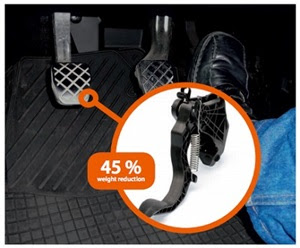 The third and possibly most effective approach is to utilize recent advances in processing technology to achieve lighter weight. Of these, microcellular foam molding has become a proven method of reducing part weight without significantly altering mechanical properties or surface appearance. The company Trexel has developed a technology known as MuCell® which can be used with a variety of different polymers like PP and PA to achieve weight reductions of at least 10-15%, sometimes even more.

The technology has recently been enhanced through the use of carbon fiber prepregs. This now brings us to the newest technology for light-weighting, thermoplastic composites with glass (GFRP) or carbon fiber reinforced plastics (CFRP), which have been in use for over a half-century originally in the aerospace industry, later in high-end sports and racing cars, and today in wind turbines. This technology can be further enhanced through the use of unidirectional (UD) tapes, which provide a means for increasing strength and stiffness in the precise direction and location needed based on matching the stress requirements, such that the material is used in the most efficient manner.(2)
Lighter Under the Hood Parts & Effect on Plastic Requirements

The trend today is to develop smaller-size engines producing the same or even higher levels of power. As a result, a greater number of components are packed into tighter spaces, often with limited distance separating them from the heat source. This has inevitably led to an increase in heat generation.

Plastics have had to evolve. Boron Nitride from Momentive  has been used with a variety of different engineering plastics commonly found in automotive parts, including nylons, acetals and polyesters. It helps to conduct heat away from the source, releasing it safely out to the ambient environment. This enables designers and engineers to reach even farther in replacing more components under-the-hood, going from metal to plastic, knowing that they now have an effective way of dealing with heat transfer. Examples of such components besides the cylinder block it, are cylinder head covers, throttle bodies, fuel injector rails, and oil pumps. Already most intake manifolds in current production are two-piece vibrationally-welded PA66 reinforced with 33%GF. Perhaps exhaust manifolds will be next, although more cost-effective high-heat polymers that can withstand the aggressive and caustic environment of automotive exhaust must first to be developed and commercialized. 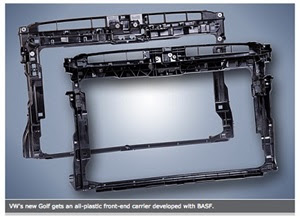 Front End Carrier, Source: Automotive Engineering, Feb 2013, SAE
Plastics Able to Perform Under Such Conditions
Plastics that withstand these conditions include various grades of nylon (PA6, PA66) and aromatic polyamides (PPA, PARA) as well as polyester (PBT), polyphenylene sulfide (PPS) and polyetherimide (PEI).
Polypropylene reinforced with chemically coupled glass fiber can also be used for some under-the-hood components like front end carriers, often with significant cost savings, however the mechanical performance of PP is typically lower than that of PA, assuming that the design can be changed to accommodate this material.
Quest for Lighter Weight Also Affects Other Automotive Parts
Car Body Panels & Trim Components Body panels and trim components (including body-side moldings, sunroof frames, door handles, rooftop luggage racks, pickup tailgates, bumpers, fascia and wheel rims)
are examples of exterior applications that were once metal but are typically made of plastic today. 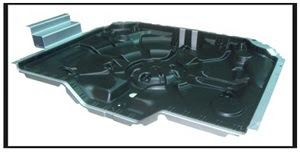 Downsizing affects these applications mainly in geometry, with high flow often being a key requirement.
This favors the use of materials that flow well in thinner sections. Particularly over relatively longer paths due to the geometry and gating of the part.
Thermoplastic elastomers (TPE’s and TPU’s) are quite adaptable to meeting these requirements particularly for softer parts needing resilience and impact strength.
Also, they perform well at low temperature (-20 to -40ºC) along with the ability to survive industry mandated crash tests.
Examples of these applications are: Bumper covers, Fascia, Splash guards and other flexible components.
In many cases, performance requirements can also be met with existing plastic materials by modifying or optimizing the part design.
Examples include the use of underside ribbing, thinner walls and more generous curvature without sharp corners that would otherwise cause premature failure.
Automotive Seating
Automotive seating has benefited from the use of advanced processing technologies involving prepreg lamination and thermoforming in place of traditional injection molding or metal sheet stamping. Interior door panels, cross-car body beams and dash panels are also being targeted for replacement of traditional materials with lighter weight thermoplastics and thermoplastic composites. Also, we see the rise of aerodynamic styling, where hood-lines and side profiles have become sleeker and less “boxy” in appearance. This too has an impact on material selection. This has definitely favored the use of plastics for fenders and body panels. They can be more easily manufactured in complex curved shapes than their traditional stamped steel predecessors. 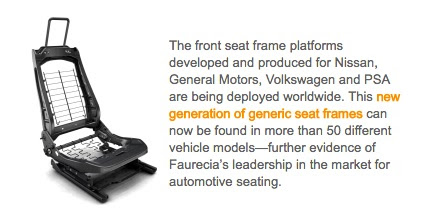 Wheel Rim
As carbon fiber becomes more widespread in supply and prices continue to decline, we should witness a trend toward more carbon fiber reinforced plastics. It offers higher strength-to-weight ratio compared to glass. One example is an all thermoplastic wheel rim designed by BMW, featuring PA66 reinforced with continuous carbon fiber (CFRP). BMW claims this material is 30% lighter than the equivalent design in aluminum and 50% lighter than steel.(5)

In this article we have explored the trend of downsizing and weight reduction on automotive components, and how they affect the selection of plastic materials. This has also resulted in changes in part design and manufacturing technologies. Based on the past several decades it is expected that the use of thermoplastics and thermoplastic composites will continue for the foreseeable future.
As hybrid and fully-electric vehicles enter the market, there will no doubt be even more pronounced need for smaller and lighter-weight components. This is because electric motors still have to compete with traditional internal-combustion engines on the basis of power output vs engine weight, not to mention cost.
This is specially the case when gasoline and diesel fuel prices are at such historically low levels as to make newer technologies appear uneconomical, at least initially. As the size of an electric motor increases, it entails a weight penalty. Designers are trying to reduce the overall motor size in order to maintain their weight goals.
Reducing the mass of an electric vehicle allows it to travel farther on a single battery charge.(4)